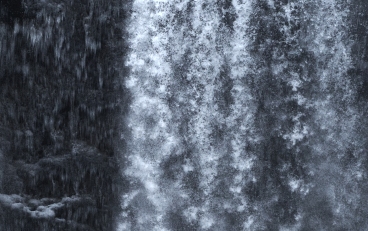 Clare Langan unveils two pieces of work commissioned for the new Eolas Building, Maynooth University, which officially opens on 5th October. To coincide with the opening of the building an exhibition at Illuminations details the creative processes behind Clare Langan’s new work.

Waterfall is a permanent photographic installation on the feature wall in the first floor stairwell void. It consists of a 10m-high, life-size waterfall, which is shot using high-speed photography. River is a permanent moving-image video installation in the main reception area. It consists of a river shot in extreme slow motion, where every droplet is visible, and moves dramatically across the three LCD synchronized screens.

River and Waterfall are the result of commission awarded by the University Art Committee following a limited competition (Per Cent for Art Scheme).
David Monahan – Leaving Dublin: 20 October-13 November

David Monahan’s Leaving Dublin details the phenomenon of emigration in the post-Celtic Tiger years. Through poignant portraits and a photographic imagining of arrival in a new place, for a new life, Monahan’s Leaving Dublin reminds us of the human cost of economic catastrophe. Leaving Dublin has been internationally acknowledged as a metaphor for our times by CBS News, The New York Times, The Toronto Star, The Immigration Museum Melbourne, Australia and many others.

Skawennati Tricia Fragnito is a Mohawk artist, writer, and curator, based in Concordia University, Montreal, whose projects have included CyberPowWow (www.CyberPowWow.net), a virtual gallery and chat space, and Imagining Indians in the 25th Century (www.ImaginingIndians.net). TimeTraveller™ deploys an inventive and witty use video game technology to re-imagine the history of colonisation from the point of view of native peoples. This is the first exhibition of Skawennati’s work in Ireland.

This entry was posted on September 21, 2015 by illuminationsgallery in Uncategorized.

Error: Twitter did not respond. Please wait a few minutes and refresh this page.